This morning about fifty flight attendants from Norwegian’s U.S. bases united at the steps of the U.S. Department of Transportation in Washington, DC. They took action to voice their support for Norwegian Air International’s (NAI) application for a foreign air carrier permit application and urged the Department to approve it without further delay. The application has been pending for over a year.

“We´re here in the Nation´s capitol to once and for all tell our government that it´s time to approve Norwegian Air International´s application, which is in full accordance with the Open Skies Agreement.I represent 300 cabin crew members at our U.S. bases in New York and Fort Lauderdale and we want new routes that will provide more jobs for pilots, crew and local municipalities, while also providing more choices and lower fares for the U.S. traveler,” said Joseph Gabriel, Base Chief Cabin Crew at Norwegian´s Fort Lauderdale base.

Norwegian’s U.S. based crews have also written a letter to President Obama and Department of Transportation Secretary Foxx http://www.openourskies.com/a-letter-to-our-president/ expressing their support for the “swift approval” of the foreign air carrier permit. Members of the U.S. based crew attending the event will deliver this letter to the Department of Transportation at the morning rally. 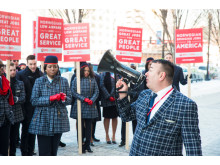 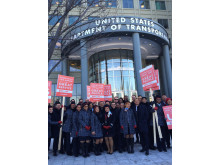