NEW YORK (JULY 28, 2017) – Norwegian, the World’s Best Low-Cost, Long Haul Airline and Europe’s Best Low-Cost Airline, today announced its first black and first American female tailfin hero, Sojourner Truth. The image of the notable abolitionist and activist will be featured on the tailfin of the airline’s next Boeing 737 MAX 8 aircraft. The Sojourner Truth aircraft, the second in the airline’s American hero series, will take flight to the United States in a few weeks.

Born Isabella Baumfree in Upstate New York, the former slave changed her name to Sojourner Truth in 1843. She gave numerous speeches throughout her life and was recognized as a great orator for her ability to capture the crowd with her accounts what she endured while enslaved. In 1851, Truth delivered remarks about slavery and women’s rights at the Ohio Women’s Rights Convention that later became known as the “Ain’t I a Woman” speech. Although she was best known for her dedication to the abolition of slavery and women’s rights, Truth was also a proponent for prison reform, property rights and universal suffrage. One of the Smithsonian’s “100 Most Significant Americans of All Time,” Truth helped to recruit Black troops for the Union Army during the Civil War. She died in Battle Creek, Michigan in 1883 and was able to see the abolition of slavery in her lifetime.

“Our tailfin hero program celebrates everyday heroes who are admired for their various accomplishments and ability to inspire others to action. Sojourner Truth is definitely an inspiration and a pioneer for so many people in the United States and around the world,” said Thomas Ramdahl, Norwegian’s Chief Commercial Officer. “She is someone who pushed boundaries and challenged the establishment in more ways than one. These are all qualities that describe Norwegian and our global strategy. Our aircraft are the most recognizable aspects of our brand and we are very honored to use that canvas to pay tribute to this American icon.”

Since its founding, Norwegian has a time-honored tradition of celebrating iconic, historical figures on the tails of its aircraft. Each person who is featured on a tailfin embodies Norwegian’s spirit of pushing boundaries, inspiring others and challenging the status quo. To commemorate Norwegian’s expansion in the United States, the airline will introduce a series of American icons over the next few months. Norwegian now offers 64 routes from the U.S. There are 58 transatlantic routes from 15 U.S. airports to Denmark, France, Ireland, Norway, Spain, Sweden and the United Kingdom and six routes to the French Caribbean.

About Norwegian
Norwegian is the world’s sixth largest low-cost airline and carried 30 million passengers in 2016. The airline operates more than 500 routes to 150 destinations in Europe, North Africa, Middle East, Thailand, Caribbean and the U.S. Norwegian has a fleet of more than 130 aircraft, with an average age of 3.6 years, making it one of the world’s youngest fleets. Norwegian was named the Most Fuel-Efficient Airline on Transatlantic Routes by the International Council on Clean Transportation (ICCT). Norwegian was named the World’s Best Low-Cost Long-Haul Airline by the renowned SkyTrax World Airline Awards for the third consecutive year Europe’s Best Low-Cost Airline for the fifth consecutive year. Norwegian employs 6,000 people. Follow @Fly_Norwegian on Twitter, join the discussion on Facebook and keep up with our adventures on Instagram. For more information on Norwegian and its network, visit norwegian.com. 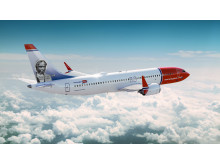 Sojourner Truth on the ta...