Norwegian, the World’s Best Low-Cost Long-Haul Airline and Airline of the Year 2017, was today named ‘Value Airline of the Year’ by Air Transport World, the leading monthly magazine for the airline industry, and will receive the award at the ATW Airline Industry Achievement Awards on March 28.

Norwegian Launches the Only Service from the Bay Area to Rome

Norwegian today launched its service from Oakland to Rome. The airline now operates six routes to Europe from Oakland International Airport, with its nonstop service to Paris launching on April 10.

Norwegian carried more than 2.3 million passengers in January, an increase of 11 percent compared to the same month previous year. The growth is primarily driven by international expansion; with a 55 percent growth, the intercontinental routes constitute the highest share. 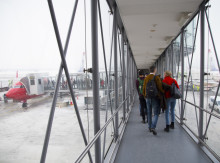 ​Norwegian reported its highest ever passenger figures in a single year with more than 33 million passengers and a load factor of 87.5 per cent in 2017. The launch of 54 new routes and a substantial increase of intercontinental traffic contributed considerably to the growth. 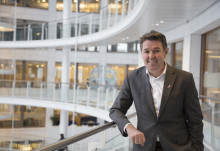 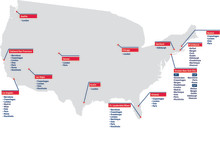 Norwegian Expands US Network with Flights to Madrid, Amsterdam and Milan

Norwegian carried 2.5 million passengers in November, an increase of 11 percent compared to the same month in the previous year. Norwegian’s long-haul routes had a 52 percent passenger growth. The overall load factor was 83.7 percent.

Norwegian, the World’s Best Low-Cost Long-Haul Airline and Airline of the Year 2017, operated its first flight from the United States to the “Eternal City” last night. Flights from New York City/Newark launched on November 9 and will be followed by nonstop service from Los Angeles on November 11 and Oakland on February 6, 2018.

Norwegian once again carried more than three million passengers in a single month. More than 3.1 million passengers traveled with the company in October, an increase of 14 percent compared to the same month previous year. The strongest growth was on Norwegian’s intercontinental routes, which have increased the number of passengers by 56 percent.

Norwegian announces its fourth American tailfin hero, Babe Ruth, whose likeness is adorned on the tail of Norwegian’s twentieth Boeing 787 aircraft, which will take flight in a few days.

Norwegian, which was named Airline of the Year 2017 by the Center for Aviation earlier this month, today launched new routes to the French Caribbean from Providence, Rhode Island and Fort Lauderdale, Florida and increased service on returning routes from New York City and Fort Lauderdale.

Norwegian Air Argentina was Wednesday nightgranted concessions to operate 153 routes from Argentina by the Argentine National Civil Aviation Administration (ANAC). These concessions came as a result of the application and consultation of 156 routes. 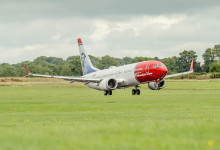 Norwegian (NAS) today reported its third quarter results for 2017. The net result was 1 billion NOK ($125 million), an improvement of 4 percent compared to the same quarter previous year. The load factor increased to 92 percent. The passenger development has been positive in all of Norwegian’s key markets, with a significant growth in the U.S. and Spain. 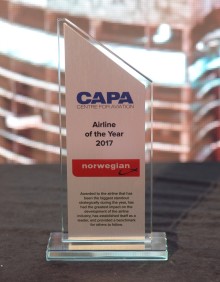 Norwegian was selected by the judging panel at the Centre for Aviation – CAPA for being at the forefront of low-cost long-haul travel, opening nearly 30 intercontinental routes in the past year between Europe, USA and Asia. CAPA also recognised Norwegian for its pioneering use of Boeing 737 MAX aircraft on underserved transatlantic routes which is creating demand in new markets.

Norwegian once again carried more than three million passengers in a single month. More than 3.1 million passengers travelled with the company in September, an increase of 14 percent compared to the same month previous year. The growth is strongest on Norwegian’s intercontinental routes and the load factor has increased to 90 percent. 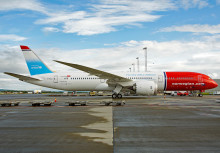 Norwegian and its decade-long corporate social responsibility partner, UNICEF, departed with a Boeing 787-9 aircraft filled with emergency aid for children in need in Yemen this morning. The aircraft used for this mission was delivered to Norwegian just last week and is the airline’s first 787 with a UNICEF livery. The aircraft’ entire cargo belly is filled with emergency aid.