U.S. demand has remained high with over 60 % of the transatlantic tickets purchased within the U.S. 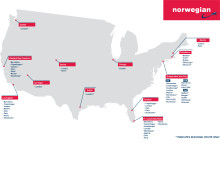 Norwegian carried almost 3.5 million passengers in May, an increase of 17 percent compared to the same month previous year. During May, the capacity growth was 51 percent. The growth will gradually decrease during the autumn and into 2019.

Norwegian carried more than three million passengers in April, an increase of 16 percent compared to the same month previous year. As expected, the figures were affected by Easter which was in March in addition to the launch of new long-haul routes.

Norwegian, the World’s Best Low-Cost Long-Haul Airline and Airline of the Year 2017, yesterday launched its latest nonstop service from the United States to Paris with its new flight from Boston Logan International Airport to Paris Charles de Gaulle Airport. The airline now operates seven routes from the U.S. to Paris.

Norwegian is increasing frequency on its route from New York to London, beginning October 2018.

Norwegian today reported its first quarter earnings for 2018 with a result of NOK -46.2 million (-$5.8 million). The quarter was characterized by international expansion, strong passenger growth and higher fuel cost. A successful private placement of shares was completed this quarter.

Norwegian is increasing frequencies on routes from New York to Dublin, Edinburgh and Shannon and from Providence to Dublin beginning winter 2018.

Norwegian carried close to 2.8 million passengers in March, an increase of 15 percent compared to the same month previous year. The growth this month is higher due to additional Easter traffic.

Norwegian Air launched two new routes from Chicago and Austin to London starting March 25, and March 27, respectively. Norwegian is the first low-cost airline to offer transatlantic service from both cities.

Norwegian carried more than 2.3 million passengers in February, an increase of 11 percent compared to the same month previous year. The increase is primarily driven by intercontinental expansion.

Norwegian today launched the world’s first female-driven in-flight entertainment comedy channel in an exclusive partnership with the online comedy platform PYPO, Put Your Pretty On. This is the first of many exciting milestones that will come from this partnership throughout this year.

Norwegian Increases Service at Stewart with Double-Daily Flights to Dublin

Norwegian today reported its full year and fourth quarter 2017 results. The net loss was –299 million NOK in 2017, while the earnings before interest, taxes and depreciations (EBITDA) was 60 million NOK.