“Norwegian continues to offer more Americans easier and more affordable access to Paris. We are proud that Norwegian now offers more connections to Europe from Orlando than any other airline. These new flights will also bring thousands of more tourists to Florida and support the local economy,” said Thomas Ramdahl, Norwegian’s Chief Commercial Officer.

“Paris has always been a global destination that appeals to Central Florida travelers and this new Norwegian Air nonstop service to Paris from Orlando should help to further strengthen the social and economic ties that connect our two great communities,” says Phil Brown, Executive Director of the Greater Orlando Aviation Authority. “This addition also makes Norwegian one of our busiest airlines with service to other popular European markets from Orlando.”

Norwegian recently announced new routes to Paris from Boston, Denver, Newark and Oakland that will launch in 2018. Additionally, service from Fort Lauderdale to Paris will launch later this month, on August 22, operating twice weekly.

Norwegian is the world’s sixth largest low-cost airline and carried 30 million passengers in 2016. The airline operates 450 routes to 150 destinations in Europe, North Africa, Middle East, Thailand, Caribbean and the U.S. Norwegian has a fleet of 120 aircraft, with an average age of 3.6 years, making it one of the world’s youngest fleets. Norwegian was named the Most Fuel-Efficient Airline on Transatlantic Routes by the International Council on Clean Transportation (ICCT). Norwegian was named the World’s Best Low-Cost Long-Haul Airline by the renowned SkyTrax World Airline Awards in 2015 and 2016, and for the fourth consecutive year, named Europe’s Best Low-Cost Airline. Norwegian employs 6,000 people. The airline offers 40 nonstop routes from the U.S. to London, Paris, Scandinavia and the Caribbean. Follow @Fly_Norwegian on Twitter, join the discussion on Facebook and keep up with our adventures on Instagram. For more information on Norwegian and its network, visit norwegian.com/us. 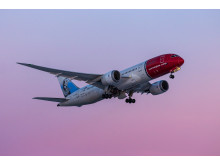