NEW YORK (MARCH 29, 2017) – Norwegian, the World’s Best Low-Cost Long-Haul Airline and Europe’s Best Low-Cost Airline, yesterday celebrated its new service from Oakland International Airport to Copenhagen Airport, Kastrup. The airline launched nonstop service from Oakland/San Francisco to Oslo and Stockholm in May 2014 and London in May 2016. With the addition of this twice-weekly service, Norwegian now offers 21 nonstop routes from the Bay Area to four European destinations.

“Expanding our West Coast service has always been a part of Norwegian’s growth plan. Not only are we adding new destinations, such as Copenhagen and Barcelona in June, but we are also increasing the frequency of our existing flights to London Gatwick,” said Thomas Ramdahl, Norwegian’s Chief Commercial Officer. “Oakland International Airport has been – and continues to be – a great partner, and if the response we’ve seen from travelers in the Oakland/San Francisco area continues, we look forward to even more growth from the Bay Area in the future.”

Port of Oakland Director of Aviation Bryant L. Francis stated, “The addition of Copenhagen to Norwegian’s Scandinavian service is key, particularly as Oakland International is experiencing such strong passenger traffic growth. Travelers from throughout the Bay Area and Wine Country are looking to OAK for quality and convenience in reaching previously unserved destinations from the East Bay, and likewise, travelers from around the world are recognizing Oakland as both a destination as well as a key gateway to the San Francisco Bay Area.”

Norwegian’s new flights will operate on Tuesdays and Saturdays using the Boeing 787 Dreamliner aircraft, which has both Premium and Economy cabins. Passengers seated in Premium will receive a three-course dinner, breakfast and complimentary drinks. Economy passengers who pre-order meals will also receive a three-course meal with drinks. Children’s meals and dietary alternatives, such as gluten free, vegan and kosher, are also available for pre-order at least 72 hours prior to departure. All passengers have access to a state-of-the-art personal touch-screen entertainment system, which also houses an interactive snack bar. The snack bar offers a wide selection of light meals, beverages and other snack items.

"In the past two years, Denmark has seen a 31% increase in Americans traveling to our fair country, and it is largely to do with Norwegian's expansion. We are thrilled to see more tourists visiting from the Bay Area," says Dennis Englund, Director North America, VisitDenmark. Often referred to as the “happiest people in the world,” the Danes are known for their urban cycling culture, eco-conscious lifestyle, modern arts and design, and some of the best cuisine the globe has to offer, and beginning March 29 all of that is only 10 hours away.

With these new routes, Norwegian offers 56 routes from the United States; 49 to Europe and seven to the French Caribbean. Upcoming 2017 launches from the U.S. include: Los Angeles to Barcelona (June 5); New York/Newark to Barcelona (June 6); Oakland/San Francisco to Barcelona (June 7); Orlando to Paris (July 31); and Fort Lauderdale to Barcelona (August 22). Last month Norwegian announced 10 new transatlantic routes on its new Boeing 737-MAX fleet, which will launch this summer. Passengers on these – and all of Norwegian’s routes – are eligible to join Norwegian Reward, the airline’s frequent flyer program and can earn CashPoints every time they fly, stay at a hotel or drive a rental car.

About Norwegian
Norwegian is the world’s sixth largest low-cost airline and carried 30 million passengers in 2016. The airline operates 450 routes to 150 destinations in Europe, North Africa, Middle East, Thailand, Caribbean and the U.S. Norwegian has a fleet of more than 110 aircraft, with an average age of 3.6 years, making it one of the world’s youngest fleets. Norwegian was named the Most Fuel-Efficient Airline on Transatlantic Routes by the International Council on Clean Transportation (ICCT). Norwegian was named the World’s Best Low-Cost Long-Haul Airline by the renowned SkyTrax World Airline Awards in 2015 and 2016, and for the fourth consecutive year, named Europe’s Best Low-Cost Airline. Norwegian employs 5,500 people. The airline offers 50 nonstop routes from the U.S. to Barcelona, London, Paris, Edinburgh, Ireland, Scandinavia and the Caribbean. Follow @Fly_Norwegian on Twitter, join the discussion on Facebook and keep up with our adventures on Instagram. For more information on Norwegian and its network, visit norwegian.com. 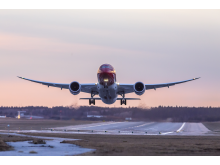