Flights from Newark, Los Angeles and Oakland take off for the cradle of Catalan culture

Last week, the world’s fastest-growing airline announced nonstop service from three U.S. cities to Rome that will launch in November this year.

“Barcelona is one of the key destinations within our global route network and we have seen such strong demand among Americans for this new route. Barcelona is now our sixth nonstop European destination out of the U.S. and over the next few months we will launch another seven nonstop destinations across Europe, making it even more affordable for Americans to travel across the Atlantic,” said Thomas Ramdahl, Norwegian’s Chief Commercial Officer.

Flights from Fort Lauderdale-Hollywood International Airport to Barcelona will launch on August 22, 2017, and operate twice weekly.

Norwegian’s low fare calendar always displays the lowest available fares to Barcelona and all of the airline’s destinations.

Norwegian operates one of the world’s youngest fleets comprised of brand new Boeing 787 Dreamliners, the aircraft type used on the Barcelona routes. All Dreamliner flights include both a Premium and an Economy cabin. Passengers on all of Norwegian’s routes are eligible to joinNorwegian Reward, the airline’s frequent flyer program and can earn CashPoints every time they fly, stay at a hotel or drive a rental car.

Norwegian is the world’s sixth largest low-cost airline and carried 30 million passengers in 2016. The airline operates more than 500 routes to over 150 destinations in Europe, North Africa, Middle East, Thailand, Caribbean and the U.S. Norwegian has a fleet of more than 130 aircraft, with an average age of 3.6 years, making it one of the world’s youngest fleets. Norwegian was named the Most Fuel-Efficient Airline on Transatlantic Routes by the International Council on Clean Transportation (ICCT). Norwegian was named the World’s Best Low-Cost Long-Haul Airline by the renowned SkyTrax World Airline Awards in 2015 and 2016, and for the fourth consecutive year, named Europe’s Best Low-Cost Airline. Norwegian employs 6,000 people. The airline offers 50 nonstop routes from the U.S. to London, Paris, Scandinavia and the Caribbean.
Follow @Fly_Norwegian on Twitter, join the discussion on Facebook and keep up with our adventures on Instagram. For more information on Norwegian and its network, visit norwegian.com. 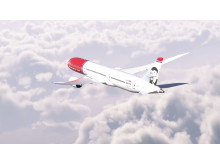