Norwegian also has four new upcoming routes from the United States to London that will be launched over the next seven months: Austin; Chicago; Denver; and Seattle. The airline now offers 11 routes from the U.S. to London, with the first London flights launched in July 2014. Norwegian is also adding non-stop flights from London to Singapore next month, and to Buenos Aires early next year.

“London is such a key destination within our network, both for American travelers wanting to go to England, but also with so many Brits wanting to come to America, both for business and leisure. Three years into our US-London service, it’s still early days for us, and we see such great potentials in continuing expanding our transatlantic operations, offering more and more Americans award-winning service at a much more affordable price,” said Thomas Ramdahl, Norwegian’s Chief Commercial Officer.

In February 2018, another Norwegian destination out of New York will go double daily as the airline will launch service from Newark International Airport to Paris’ Charles De Gaulle Airport to complement the daily Paris service out of JFK. The new service will operate six times a week. 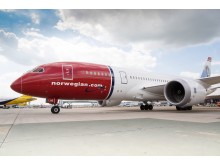