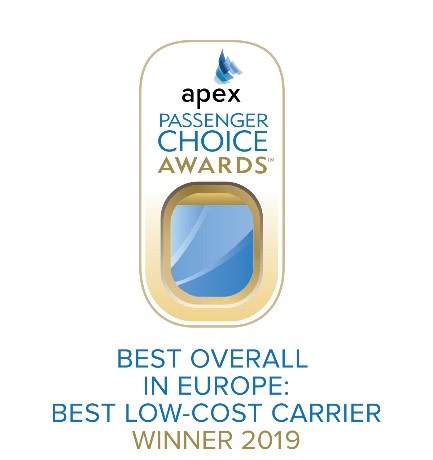 NEW YORK CITY (April 17, 2019)- Norwegian has been named ‘Best Low-Cost Carrier in Europe’ at the prestigious 2019 Passenger Choice Awards™. The APEX Passenger Choice Awards is one of the highest accolades in the industry as winners are directly voted by passengers on all aspects of the flight experience, ranging from seat comfort, cabin service, food and beverage, entertainment to Wi-Fi.

Norwegian was the first airline to offer passengers free in-flight Wi-Fi on all European flights in 2011. The airline became the first to introduce live television over the skies of Europe in 2015 and in late 2018 it took delivery of its first Boeing 787-9 Dreamliner equipped with inflight Wi-Fi. In 2019 Norwegian became the first low-cost airline to offer customers free Wi-Fi for the full duration of intercontinental flights. Customers can choose the service that suits their requirements between a completely free package to a premium service allowing the streaming of video and other multimedia content.

“It is truly an honor to receive such recognition from our passengers who value not only the excellent service, product and network that Norwegian offers but also the benefits such as free Wi-Fi that put us ahead of the competition. We would like to thank everyone who voted for us and for choosing to fly Norwegian. We will continue to innovate and invest in our passenger journey to provide an industry-leading benchmark for others to follow,” said Bjørn Kjos, Chief Executive Officer at Norwegian.”

The APEX Passenger Choice Awards are based on passenger feedback gathered through APEX’s partnership with TripIt® from Concur®, the world’s highest-rated travel-organizing app. Using a five-star scale, more than one million flights were rated by passengers across nearly 500 airlines from around the world between July 1, 2017 and June 31, 2018. First, passengers rated their overall flight experience from one to five stars. On the same screen, passengers were given the opportunity to provide anonymous ratings in five subcategories: seat comfort, cabin service, food and beverage, entertainment, and Wi-Fi. The single screen rating allows airline passengers to easily rate their flight in less than 15 seconds. The Passenger Choice Awards were independently certified by a professional external auditing company hired by APEX.

Norwegian is was one of the world’s most awarded low-cost airlines in 2018 being named the Most Fuel-Efficient Airline on Transatlantic Routes by the ICCT for a second time; World’s Best Low-Cost Long-Haul Airline for the fourth consecutive year and Europe’s Best Low-Cost Airline for the sixth consecutive year by Skytrax; Value Airline of the Year by Air Transport World; Favorite Budget Airline by Global Traveler Magazine; Best Wi-Fi in Europe and Best Overall Passenger Experience Low Cost Carrier Europe at the Passenger Choice Awards; Airline Program of the Year Europe and Africa at the Freddie Awards in recognition of the airline’s customer loyalty program – Norwegian reward; and Europe’s Leading Low-Cost Airline 2018 at the World Travel Awards.

The airline operates a young and therefore more environmentally-friendly aircraft fleet with an average age of just 3.8 years. The International Council on Clean Transportation (ICCT) has named Norwegian the most fuel-efficient airline on Transatlantic routes for two consecutive years which further demonstrates the airline’s commitment to reducing carbon emissions.

About Norwegian
Norwegian is the world’s fifth largest low-cost airline and carried over 37 million passengers in 2018. The airline operates more than 500 routes to over 150 destinations in Europe, North Africa, Middle East, Thailand, Caribbean, North and South America. Norwegian has a fleet of more than 160 aircraft, with an average age of 3.8 years, making it one of the world’s youngest and “greenest” fleets.

Norwegian has been named the Most Fuel-Efficient Airline on Transatlantic Routes by the International Council on Clean Transportation (ICCT) twice. Norwegian has been voted ‘Europe’s Best Low-Cost Airline’ by passengers for six consecutive years at the SkyTrax World Airline Awards 2013-2018, along with being named the ‘World’s Best Low-Cost Long-Haul’ Airline’ for the past four years. Norwegian employs more than 11,000 people worldwide.