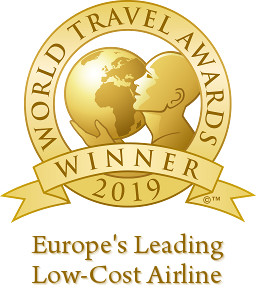 LONDON (JUNE 10, 2019) – Norwegian has been named Europe’s Leading Low-Cost Airline 2019 for the fifth consecutive year at the 26th annual World Travel Awards, one of the travel industry's most prestigious recognition.

The World Travel Awards were established in 1993 to acknowledge, reward and celebrate excellence across all key sectors of the travel industry and they are recognized globally as the ultimate hallmark of industry excellence.

"We are very proud to have been voted Europe’s leading Low-Cost airline for a fifth consecutive year. Once again this is a clear reflection of the dedication and commitment of our 11,000 colleagues. This award proves that global travelers demand low fares, friendly service and new, more environmentally friendly aircraft. We would like to thank both our customers and fellow industry peers that have once again cast their vote for Norwegian," said Bjorn Kjos, Norwegian’s CEO.

Norwegian has launched a number of new routes since the beginning of the year including Hamilton/Toronto to Dublin; San Francisco to London; Miami to London; Boston to Madrid and Rome; and Chicago to Barcelona. The airline’s next route launch is New York/JFK to Athens, commencing July 2.

Earlier this year Norwegian became the first low-cost airline to introduce free Wi-Fi on intercontinental flights. Passengers will be able to stay connected in the skies with the rollout of free and premium high-speed Wi-Fi connectivity on the carrier’s Boeing 787-9 Dreamliner. More than 50 percent of Norwegian’s 787-9 Dreamliner fleet is expected to offer in-flight connectivity by 2020.

Norwegian was one of the world’s most awarded low-cost airlines in 2018 taking home Most Fuel-Efficient Airline on Transatlantic Routes by the International Council on CleanTransportation for two consecutive years; World’s Best Low-Cost Long-Haul Airline for the fourth consecutive year and Europe’s Best Low-Cost Airline for the sixth consecutive year by Skytrax; Value Airline of the Year by Air Transport World; Favorite Budget Airline by Global Travel Magazine; In 2019 Norwegian was recognized as Best Low Cost Carrier Europe at the Passenger Choice Awards and Airline Loyalty Program of the Year Europe and Africa at the Freddie Awards in recognition of the airline’s customer loyalty program, Norwegian Reward.

The Grand Tour of World Travel Awards Gala Ceremonies are regarded as milestone events in the industry calendar, attended by the industry’s key decision makers, chief figure heads and the leading trade and consumer media.

About Norwegian
Norwegian is the world’s fifth largest low-cost airline and carried over 37 million passengers in 2018. The airline operates more than 500 routes to over 150 destinations in Europe, North Africa, Middle East, Thailand, Caribbean, North and South America. Norwegian has a fleet of more than 160 aircraft, with an average age of 3.8 years, making it one of the world’s youngest and “greenest” fleets.

Norwegian has been named the Most Fuel-Efficient Airline on Transatlantic Routes by the International Council on Clean Transportation (ICCT) twice. Norwegian has been voted ‘Europe’s Best Low-Cost Airline’ by passengers for six consecutive years at the SkyTrax World Airline Awards 2013-2018, along with being named the ‘World’s Best Low-Cost Long-Haul’ Airline’ for the past four years. Norwegian employs more than 11,000 people worldwide.