Even with strong passenger growth, the load factor was high and increased by three percentage points to 85 percent in the third quarter.Norwegian carried 7.1 million passengers this quarter and the company’s operations at London Gatwick had the strongest passenger growth.

The pre-tax result (EBT) was 505 MNOK, compared to 604 MNOK the same quarter previous year. The combination of a weak Norwegian Krone (NOK), the delayed approval from the U.S. Department of Transportation and costs associated with flight delays, affected the results this quarter.  Wet-leasing replacement aircraft and extra fuel, as well as accommodation, food and drink for delayed passengers also created extra costs. The costs associated with the long overdue application before the U.S. Department of Transportation for a foreign air carrier permit for Norwegian’s Irish subsidiary, Norwegian Air International were also considerable. The application is in full accordance with the Open Skies Agreement between the EU and the U.S.

“We’re very satisfied that throughout our world-wide route network, an increasing number of new passengers choose Norwegian. Norwegian has recently received several international awards and was even named ‘Europe’s best low-cost airline’ the second year running. However, we have also experienced some turbulence this quarter. Our results are affected by additional costs related to the pending U.S. permit for our subsidiary in Dublin, consequently reducing our ability to optimize our fleet of aircraft. Even though technical difficulties with our Boeing 787 Dreamliners have also caused additional costs, our long-haul operation now consists of more aircraft and improved reliability.  Looking into 2015, we will see a year of consolidation and lower growth. Next year, our fleet of short-haul aircraft will consist exclusively of Boeing 737-800s as older Boeing 737-300s will be phased out,” said CEO Bjørn Kjos.

Norwegian Air Shuttle ASA, commercially branded “Norwegian”, is a low-cost airline listed on the Oslo Stock Exchange. Norwegian is the second largest airline in Scandinavia and third largest low cost carrier in Europe. More than 20 million passengers fly on its network per year. Norwegian has a route portfolio that stretches across Europe into North Africa and the Middle East, as well as long-haul flights to the US and Southeast Asia. The company has a total of 417 routes to 126 destinations and employs approximately 4,500 people in Norway, Sweden, Denmark, Finland, Estonia, UK, Spain and Thailand. The company has 258 undelivered aircraft on firm order. Norwegian was founded in 1993 and its headquarter is in Fornebu, Norway. In 2013 and 2014, Norwegian was voted Europe’s best low-cost carrier of the year by the renowned SkyTrax World Airline Awards. Norwegian offers better leg room than most competitors, in-flight WiFi, world-class punctuality and a fleet of 100 aircraft with an average age of only 4.8 years. 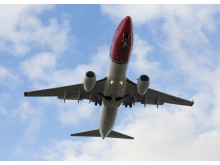 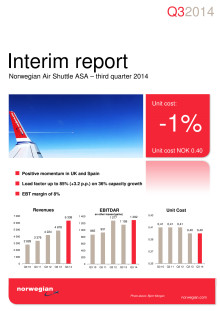