Norwegian (NAS) today reported its second quarter earnings for 2018 with a net profit of NOK 300 million, despite the highest growth in the company’s history. Going forward, the growth will slow down and ramp-up costs will decrease, in line with Norwegian’s strategy.

The net result was NOK 300 million compared to a loss of NOK 691 million the second quarter last year. The result is affected by a reduction in unit costs, which has decreased by nine percent this quarter, and with 19 per cent excluding fuel. One-offs have also this quarter contributed to the cost reduction. The costs are lower despite Norwegian’s highest ever production growth (ASK) of 48 per cent and increasing fuel prices. Norwegian’s traffic growth (RPK) this quarter was 46 per cent.

Norwegian has grown rapidly over the past years, expanding international traffic and adding new bases, destinations and markets to its portfolio. In terms of total revenue, the US represents the strongest market outside Norway.

“Despite being at the peak of our growth phase, we have been able to present a profit and decreased unit costs during the second quarter. Going forward, the growth will slow down and we will reap what we have sown for the benefit of our customers, staff and shareholders,” said CEO of Norwegian, Bjørn Kjos.

“I’m also extremely happy and grateful that we during the past six months have received ten different awards. In June we were named Norway’s most innovative company and in July, we were awarded the “World Travel Award” for the best low-cost airline in Europe, and the “Ambassador’s Award” from the US Ambassador to Norway. The latter proves the importance Norwegian has had in terms of strengthening and building US – Norway relations and growing the countries’ economies. It shows that what we have achieved so far in the US is being appreciated and acknowledged by the US government,” Kjos continues.

During the second quarter, Norwegian has introduced three Boeing 787-9 Dreamliners and two Boeing 737 MAX 8 aircraft to its fleet. In total, this year Norwegian will take delivery of 11 Boeing 787-9 Dreamliners, 12 Boeing 737 MAX 8 and the two Boeing 737- 800 aircraft that have already been delivered. With an average age of only 3.7 years, Norwegian’s fleet is one of the “greenest” and most modern fleets in the world.

Norwegian is the world’s sixth largest low-cost airline and carried around 33 million passengers in 2017. The airline operates 500 routes to 150 destinations in Europe, North Africa, Middle East, Thailand, Caribbean, the U.S and South America. Norwegian has a fleet of 150 aircraft, with an average age of 3.6 years, making it one of the world’s youngest fleets. Norwegian was named the Most Fuel-Efficient Airline on Transatlantic Routes by the International Council on Clean Transportation (ICCT). Norwegian has been voted ‘Europe’s best low-cost carrier’ by passengers for five consecutive years at SkyTrax World Airline Awards from 2013-2017, along with being awarded the ‘World's best low-cost long-haul airline’ in 2015, 2016 and 2017. Norwegian employs 9,000 people. The airline offers 40 nonstop routes from the U.S. to London, Paris, Scandinavia and the Caribbean. 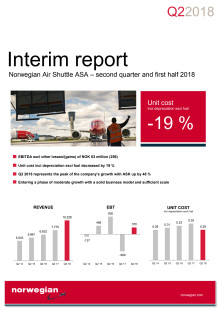