The company carried more than 2.8 million passengers this month, an increase of 317,821 passengers from the same month previous year. The load factor was 90.2 percent, up 2.2 percentage points.

The increase of passengers is 13 percent compared to the same month last year. The total traffic growth (RPK) increased by 17 percent this month, driven by 15 percent capacity growth and a two percentage point higher load factor.

“We are grateful that so many choose to fly with Norwegian and we will work hard to maintain our customers’ trust. Today’s traffic figures show a solid load factor across all markets,” said CEO of Norwegian, Bjørn Kjos.

Norwegian operated 99.2 percent of the scheduled flights in June, whereof 69.8 percent departed on time. Several factors affected Norwegian’s on-time performance in June, including weather-related challenges and several strikes. The strike among French air traffic controllers severely affected the traffic in Europe, while a fuel strike in Norway affected our operation in Scandinavia.

Founded in 1993 and headquartered in Oslo, Norway, award-winning Norwegian Air Shuttle is the third largest low-cost carrier in Europe and the world’s sixth largest. Norwegian offers more nonstop European destinations from the United States than any other European airline with seamless connections across the continent. Norwegian offers 40 nonstop routes from the U.S. to London, Paris and Scandinavia, as well as six routes from the U.S. to the Caribbean. Onboard features include more legroom than most competitors and free in-flight Wi-Fi on short-haul routes. The airline carried 26 million passengers in 2015 on the world’s most modern and eco-friendly fleet to its network that stretches across Europe into North Africa and the Middle East, as well as long-haul flights to the U.S. and Southeast Asia – a total of more than 440 routes to over 130 destinations. Over 5,500 people in Scandinavia, Europe, Asia, and the U.S. work for Norwegian. Follow @Fly_Norwegian on Twitter, join the discussion on Facebook and keep up with our adventures on Instagram. For more information on Norwegian and its network, visit norwegian.com. 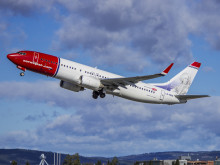 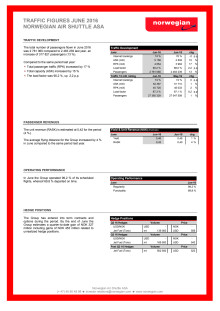