Norwegian reports a continued passenger growth in July. The airline sets new passenger record with nearly 2.7 million travellers in July, the highest number ever in a single month. July was also characterised by considerable holiday traffic in all markets and a record high load factor of 94 percent.

Norwegian carried 2,690,458 passengers in July, an increase of 8 percent compared to the same month previous year. The total passenger traffic (RPK) increased by 7 percent, while the capacity (ASK) increased by 1 percent this month. The load factor was 93.8 percent in July, up 5.6 percentage points from the same month last year. 97 percent of the long-haul seats were filled in July.

“I am very pleased that so many travellers chose to fly with Norwegian in July. Not only did we set a new passenger record, we also filled the planes better than ever. With a 94 percent load factor, the demand is equally high in well-established markets in Scandinavia and in new markets such as the UK, Germany, Spain and the US. This proves that Norwegian’s international strategy is working and we are even better equipped to meet the tough competition going forward,” said CEO Bjorn Kjos. 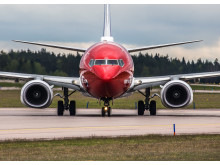 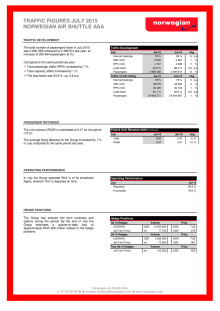