In January, 1,609,057 passengers flew with Norwegian. This is an increase of five percent compared to January 2014. The total passenger traffic (RPK) increased by 21 percent and the total capacity (ASK) increased by 13 percent this month. The load factor was 80 percent in January, up 5.2 percentage points.

“I’m very pleased that we have a higher load factor in a low season month like January. The increase in traffic growth is mainly due to a stronger focus on the European market, along with a considerable growth in our long-haul operation,” said Norwegian’s CEO Bjørn Kjos.

Norwegian Air Shuttle ASA, commercially branded “Norwegian”, is a low-cost airline listed on the Oslo Stock Exchange. Norwegian is the second largest airline in Scandinavia and third largest low cost carrier in Europe. Close to 24 million passengers fly on its network per year. Norwegian has a route portfolio that stretches across Europe into North Africa and the Middle East, as well as long-haul flights to the US and Southeast Asia. The company has a total of 424 routes to 130 destinations and employs approximately 4,500 people in Norway, Sweden, Denmark, Finland, Estonia, UK, Spain and Thailand. The company has 258 undelivered aircraft on firm order. Norwegian was founded in 1993 and its headquarter is in Fornebu, Norway. Norwegian offers better leg room than most competitors, in-flight WiFi on short haul, world-class punctuality and a fleet of 96 aircraft with an average age of only 4.8 years. In 2013 and 2014, Norwegian was voted Europe’s best low-cost carrier of the year by the renowned SkyTrax World Airline Awards. In 2014, Norwegian also won three prizes at the prestigious Passenger Choice Awards for Best Airline in Europe, Best Inflight Connectivity & Communications and Best Single Achievement in Passenger Experience for its moving map on the 787 Dreamliners. In addition, Norwegian was awarded Europe's best low-cost airline by AirlineRatings.com for the second year running. 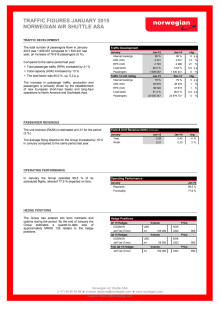