OSLO (JULY 13, 2017) – Norwegian (NAS) today reported its second quarter results for 2017. The pre-tax result (EBT) was 861 million NOK. This is slightly down from last year’s result, mainly due to higher oil prices and the air passenger tax implemented by the government in Norway last year. The overall performance was positive in all of Norwegian’s main markets during the second quarter.

The load factor for the second quarter has remained high at 88 percent, the same as the second quarter last year. This means fuller aircraft and a significant reduction in carbon dioxide (CO2) emissions per passenger kilometer (RPK).

During the second quarter, Norwegian has introduced one new Boeing 787 Dreamliner, eight new Boeing 737-800 and two Boeing 737 MAX aircraft to its fleet. Norwegian will have a fleet of at least 42 Dreamliner long-haul aircraft within a few years.

Growth in all of Norwegian’s markets
During the second quarter, the airline carried 8.6 million passengers, an increase of 12 percent. Norwegian’s strongest growth in terms of passenger numbers was Oslo Airport and London Gatwick. During this quarter, Norwegian has started up transatlantic flights with single-aisle aircraft, launched a new pilot base in Rome and announced its first ever route to South America (Buenos Aires).

During the second quarter, Norwegian’s total revenue was 7.8 billion, up 17 percent from the same quarter last year. The sale of 2.5 percent of Bank Norwegian shares contributed positively to the result. Norwegian's net profit this quarter ended at 1.1 billion NOK. Norwegian’s liquidity has increased from three billion NOK last year to just under six billion NOK this year. Both Norwegian’s production growth (ASK) and traffic growth (RPK) for this quarter was 19 percent. Norwegian’s growth is estimated to be 25 percent for the whole year.

This summer, Norwegian also took delivery of two Boeing 737 MAX aircraft. Norwegian is the first European airline to operate this brand new single aisle aircraft type, which is capable of flying even longer distances than the Boeing 737-800. These aircraft allows Norwegian to open up new, unserved routes and offer even more affordable transatlantic fares.

“I am very pleased with the high load factor for this quarter. I’m also grateful that more than 200 million passengers have shown confidence in us and chosen to fly with Norwegian since we began flying in 2002,” said Norwegian’s CEO Bjørn Kjos.“However, we have had significant additional costs for leasing of aircraft, high oil price and the air passenger tax implemented by the government in Norway last year, which have had a negative impact on the result. Bookings and pre-sales for the coming months are looking very good and it has also been a great pleasure to receive fantastic feedback from our customers in the form of two SkyTrax awards. This would never be possible without all the dedicated people working at Norwegian,” he continued. 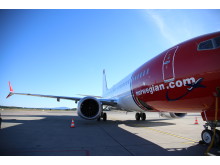 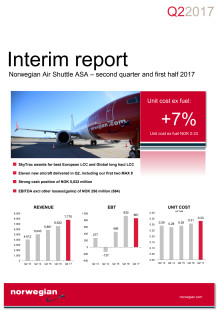