OSLO/FORNEBU (APRIL 6, 2017) – Norwegian reported its traffic results for March 2017. A total of 2,453,551 passengers chose to fly with Norwegian in March – 258,514 more than the same period last year. The total traffic growth (RPK) increased by 16 percent, while the capacity growth (ASK) increased by 22 percent. The load factor was 84.1 percent, down 3.8 percentage points. The period is influenced by the fact that Easter is in April this year, whereas it was in Mach last year, consequently reducing the unit revenue by approximately 10 percent.

“We are very pleased to see that more passengers chose to fly Norwegian. The growth is primarily driven by our international traffic, which is becoming increasingly important in the company’s global expansion,” said CEO of Norwegian, Bjørn Kjos.

Note to Editors: Detailed information is available in the attached traffic report.

About Norwegian
Norwegian is the world’s sixth largest low-cost airline and carried 30 million passengers in 2016. The airline operates 450 routes to 150 destinations in Europe, North Africa, Middle East, Thailand, Caribbean and the U.S. Norwegian has a fleet of more than 120 aircraft, with an average age of 3.6 years, making it one of the world’s youngest fleets. Norwegian was named the Most Fuel-Efficient Airline on Transatlantic Routes by the International Council on Clean Transportation (ICCT). Norwegian was named the World’s Best Low-Cost Long-Haul Airline by the renowned SkyTrax World Airline Awards in 2015 and 2016, and for the fourth consecutive year, named Europe’s Best Low-Cost Airline. Norwegian employs 6,000 people. The airline offers 50 nonstop routes from the U.S. to London, Paris, Scandinavia and the Caribbean. Follow@Fly_Norwegian on Twitter, join the discussion on Facebookand keep up with our adventures on Instagram. For more information on Norwegian and its network, visit Trnorwegian.com. 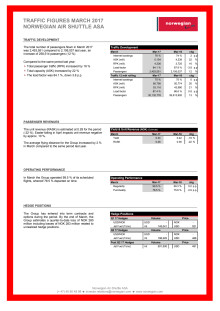