NEW YORK CITY (SEPTEMBER 25, 2018) – Norwegian, the World’s Best Low-Cost Long-Haul Airline and Airline of the Year 2017, has been named a Four-Star Low-Cost Airline by The Airline Passenger Experience (APEX), the highest honor for low-cost airlines. Their Official Airline Ratings™ was the first airline rating program based solely on certified passenger feedback and Norwegian was one of ten low-cost airlines worldwide to receive the honor.

"We are honored to receive a Four Star rating, especially as it is our own passengers that have voted based on their experience with us. In 2018, we have won numerous awards and I would like to thank our hard-working and professional employees for everything they do, as they are the reason our customers have such a great experience with us," said Bjørn Kjos, Norwegian’s CEO and Founder.

The announcement was made Monday night at APEX’s gala in Boston. APEX is the only non-profit membership trade association dedicated to improving the entire airline passenger experience, announced the airlines honored with four- and five-star Official Airline Ratings. Airlines are divided into three different categories: Global Airlines; Major Regional; and Low-Cost Carriers.

The APEX Official Airline Ratings™ were created based on passenger feedback gathered through APEX's partnership with TripIt® from Concur®, the world's highest-rated travel-organizing app. Using a five-star scale, more than one million flights were rated by passengers across nearly 500 airlines from around the world between July 1, 2017, and June 30, 2018. First, passengers rated their overall flight experience from one to five stars. On the same screen, passengers were given the opportunity to provide anonymous ratings in five subcategories: seat comfort, cabin service, food and beverage, entertainment and Wi-Fi. The single screen rating allows airline passengers to easily rate their flight in less than 15 seconds.

"We are extremely proud of the results of our passenger-driven Official Airline Ratings program with TripIt," said APEX CEO Joe Leader. "Of nearly 500 airlines rated worldwide, less than nine percent were rated by their passengers at the highest Five-Star Airline level and only the next 14 percent reached the prestigious Four-Star Airline tier."

Norwegian is now one of the world’s most awarded low-cost airlines following previous accolades in 2018: Most Fuel-Efficient Airline on Transatlantic Routes by the ICCT; World’s Best Low-Cost Long-Haul Airline for the fourth consecutive year and Europe’s Best Low-Cost Airline for the sixth consecutive year by Skytrax;Value Airline of the Year by Air Transport World; Favorite Budget Airline by Global Travel Magazine; Best Wi-Fi in Europe and Best Overall Passenger Experience Low Cost Carrier Europe at the Passenger Choice Awards; Airline Programme of the Year Europe and Africa at the Freddie Awards in recognition of the airline’s customer loyalty programme – Norwegian reward; and Europe’s Leading Low-Cost Airline 2018 at the World Travel Awards.

Norwegian is the world’s fifth largest low-cost airline and carried 33 million passengers in 2017. The airline operates more than 500 routes to over 150 destinations in Europe, North Africa, Middle East, Thailand, Caribbean, North and South America. Norwegian has a fleet of more than 150 aircraft, with an average age of 3.7 years, making it one of the world’s youngest and “greenest” fleets.

Norwegian has been named the Most Fuel-Efficient Airline on Transatlantic Routes by the International Council on Clean Transportation (ICCT) twice. Norwegian has been voted ‘Europe’s Best Low-Cost Airline’ by passengers for six consecutive years at the SkyTrax World Airline Awards 2013-2018, along with being named the ‘World’s Best Low-Cost Long-Haul’ Airline’ for the past four years. Norwegian employs more than 9,000 people worldwide. 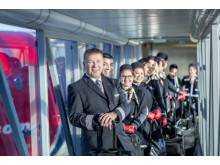 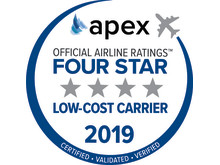