“The four airlines are standouts in their respective markets with very clever innovations and they consistently delivery an excellent value proposition. These airlines may not always offer the lowest fare but what they always do is deliver the best value. And these airlines open new routes and make travel fun for millions who could previously not afford to fly,” said AirlineRatings.com Editor-in-Chief Geoffrey Thomas.

“This recognition means a lot and yet again confirms that customers appreciate Norwegian. We have new aircraft, free WiFi, low fares and many direct flights, but most importantly; we have skilled employees who every day ensure that our passengers enjoy their experience on board. Norwegian has won numerous international awards where the customers themselves have voted for us to become the best low-cost carrier. We will do our utmost and continue to work hard so that everyone has a good journey with us,” says Norwegian's CEO Bjørn Kjos.

Norwegian Air Shuttle ASA, commercially branded “Norwegian”, is a low-cost airline listed on the Oslo Stock Exchange. Norwegian is the second largest airline in Scandinavia and third largest low cost carrier in Europe. More than 20 million passengers fly on its network per year. Norwegian has a route portfolio that stretches across Europe into North Africa and the Middle East, as well as long-haul flights to the US and Southeast Asia. The company has a total of 417 routes to 126 destinations and employs approximately 4,500 people in Norway, Sweden, Denmark, Finland, Estonia, UK, Spain and Thailand. The company has 258 undelivered aircraft on firm order. Norwegian was founded in 1993 and its headquarter is in Fornebu, Norway. In 2013 and 2014, Norwegian was voted Europe’s best low-cost carrier of the year by the renowned SkyTrax World Airline Awards. Norwegian offers better leg room than most competitors, in-flight WiFi, world-class punctuality and a fleet of 101 aircraft with an average age of only 4.8 years. 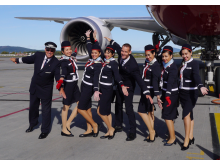