NEW YORK (OCTOBER31, 2017) – Norwegian, the international carrier that was named Airline of the Year at the 2017 CAPA Aviation Awards, announced its fourth American tailfin hero, Babe Ruth. Ruth’s likeness is adorned on the tail of Norwegian’s twentieth Boeing 787 aircraft, which will take flight in a few days.

George Herman Ruth, Jr., one of the most famous American baseball players, was born in Baltimore, Maryland in 1895. At the age of seven, Ruth was sent to a Catholic reform school, and it was there that he developed a passion for baseball. Ruth was offered a spot on the Baltimore Orioles after owner Jack Dunn took notice of him in high school and signed him to the team in 1914. While playing with the Orioles, Ruth, 19, was referred to as “Jack’s newest babe,”by fellow players – a name by which he would be known for the remainder of his career.

“Babe Ruth is an American icon and an inspiration to many people worldwide, so when it came time to select our next American tailfin hero, it seemed fitting to pay homage to America’s pastime and someone who is known for never giving up,” said Thomas Ramdahl, Norwegian’s Chief Commercial Officer.“Like Babe Ruth, Norwegian is persistent and has received many accolades. Over the last few years, we’ve been tenacious in our pursuit to bring more affordable flights to the United States and fulfill our mission to allow everyone to fly affordably.”

Since its founding, Norwegian has celebrated iconic and historical figures on the tails of its aircraft. Each of these people share Norwegian’s spirit of pushing boundaries, inspiring others and challenging the status quo. Previously announced American tailfin heroes include Clara Barton, Sojourner Truth and Benjamin Franklin. The airline recently took delivery of the Boeing 787-9 Dreamliner featuring Babe Ruth, the twelfth aircraft of its type in Norwegian’s ever-growing fleet. The airline now offers 64 routes from the U.S; 58 of which are transatlantic routes from 15 U.S. airports to Denmark, France, Ireland, Norway, Spain, Sweden and the United Kingdom and six routes to the French Caribbean.

About Norwegian
Norwegian is the world’s sixth largest low-cost airline and carried 30 million passengers in 2016. The airline operates more than 500 routes to more than 150 destinations in Europe, North Africa, Middle East, Thailand, Caribbean and the U.S. Norwegian has a fleet of more than 130 aircraft, with an average age of 3.6 years, making it one of the world’s youngest fleets. Norwegian was named the Most Fuel-Efficient Airline on Transatlantic Routes by the International Council on Clean Transportation (ICCT). Norwegian was named the World’s Best Low-Cost Long-Haul Airline by the renowned SkyTrax World Airline Awards in 2015 and 2016, and for the fourth consecutive year, named Europe’s Best Low-Cost Airline. Norwegian employs 6,000 people. The airline offers 50 nonstop routes from the U.S. to London, Paris, Scandinavia and the Caribbean. Follow @Fly_Norwegian on Twitter, join the discussion on Facebook and keep up with our adventures on Instagram. For more information on Norwegian and its network, visit norwegian.com. 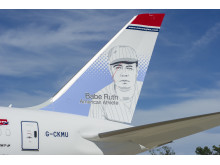