NEW YORK (MARCH 14, 2017) – Norwegian, the World’s Best Low-Cost Long-Haul Airline and Europe’s Best Low-Cost Airline, today announced that it has flown more than four million passengers between the United States and Europe since the first transatlantic service began in 2013.

In just over three and a half years, four million passengers have chosen to fly with Norwegian across the Atlantic on services from the U.S. directly to five destinations in Europe and Scandinavia – Copenhagen, Oslo, Stockholm, London and Paris.

“Reaching this global milestone of flying four million passengers in under four years shows the huge demand for affordable flights across the Atlantic. Norwegian’s transatlantic offering is not only great news for the traveling public, but it is also great for the local U.S. and European economies as we will bring more tourists that will increase spending and support thousands of local jobs,” said Norwegian CEO Bjørn Kjos. “Our low-cost long-haul flights to and from the U.S. are only the beginning; we have ambitious plans to continue offering passengers affordable high-quality transatlantic flights to a range of other global destinations.”

To celebrate this milestone, Norwegian surprised one lucky passenger in Los Angeles, London, Paris and Stockholm with a pair of round-trip premium tickets for any Norwegian long-haul flight.

About Norwegian
Norwegian is the world’s sixth largest low-cost airline and carried 30 million passengers in 2016. The airline operates 450 routes to 150 destinations in Europe, North Africa, Middle East, Thailand, Caribbean and the U.S. Norwegian has a fleet of more than 110 aircraft, with an average age of 3.6 years, making it one of the world’s youngest fleets. Norwegian was named the Most Fuel-Efficient Airline on Transatlantic Routes by the International Council on Clean Transportation (ICCT). Norwegian was named the World’s Best Low-Cost Long-Haul Airline by the renowned SkyTrax World Airline Awards in 2015 and 2016, and for the fourth consecutive year, named Europe’s Best Low-Cost Airline. Norwegian employs 5,500 people. The airline offers 50 nonstop routes from the U.S. to Barcelona, London, Paris, Edinburgh, Ireland, Scandinavia and the Caribbean. Follow @Fly_Norwegian on Twitter, join the discussion on Facebook and keep up with our adventures on Instagram. For more information on Norwegian and its network, visit norwegian.com. 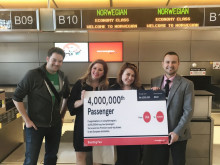