Norwegian, deemed the world’s Best Low-Cost Long-Haul Airline and also Europe’s Best Low-Cost Airline for the past three consecutive years by SkyTrax, has announced it will launch four weekly flights from Boston Logan International Airport (BOS) to London’s Gatwick Airport (LGW) in May 2016. Flights will be available for sale later this year. Last month, Norwegian announced flights from Boston to Guadeloupe and Martinique, which will commence on December 3, 2015, with twice weekly service to both destinations.

“We believe Bostonians deserve more affordable fares and high quality flights. Not only will we bring great fares and service to the Caribbean this winter, but we will now also offer the best fares to London starting next year,” said Norwegian’s CEO Bjørn Kjos. “Our nonstop flights from the U.S. to Europe have been very well received and we see a strong demand for more routes over the Atlantic with our brand new Dreamliners and fares that everyone can afford.”

“We welcome Norwegian to Boston and applaud their rapid growth,’’ said Thomas P. Glynn, CEO of Massport. “Only weeks after announcing service to Guadeloupe and Martinique in the Caribbean, we are excited that Norwegian is adding nonstop service to London Gatwick as a new destination for 2016. This is excellent news for travelers who are looking for great service on a long haul low cost carrier.”

Norwegian has quickly become the third largest airline at London Gatwick, and operates more flights between the U.S. and the UK’s second-largest airport than any other airline. From London Gatwick, Norwegian can connect customers to any of its 34 European destinations. The airline is also focused on growing its presence in Spain, where one fifth of its fleet is based. Announced today, the airline will offer seven domestic routes into the Canary Islands starting in October. Norwegian will have daily flights from Madrid to Gran Canaria and Tenerife North; from Barcelona to Gran Canaria, Tenerife North and Fuerteventura; and from Malaga to Gran Canaria and Tenerife South.

Norwegian operates one of the world’s most modern and eco-friendly fleets and these new routes between Boston and Europe will be served by the Boeing 787-9 Dreamliner. The airline will start taking delivery of the new Dreamliner in 2016, with 35 seats in Premium and 309 seats in Economy.

Founded in 1993 and headquartered in Oslo, Norway, award-winning Norwegian Air Shuttle is the third largest low-cost carrier in Europe and the world’s seventh largest. Norwegian offers more nonstop European destinations from the United States than any other European airline with seamless connections across the continent. Norwegian offers 25 nonstop routes from the U.S. to London and Scandinavia, as well as six routes from the U.S. to the Caribbean. Onboard features include more legroom than most competitors and free in-flight Wi-Fi on short-haul routes. The airline carried close to 24 million passengers last year on the world’s most modern and eco-friendly fleet to its network that stretches across Europe into North Africa and the Middle East, as well as long-haul flights to the U.S. and Southeast Asia – a total of 439 routes to 132 destinations. Over 5,500 people in Scandinavia, Europe, Asia, and the US work for Norwegian. Follow @Fly_Norwegian on Twitter, join the discussion on Facebook and keep up with our adventures on Instagram. For more information on Norwegian and its network, visit norwegian.com. 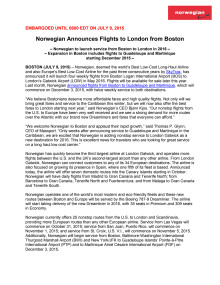