“We are excited to add Chicago and Austin to our ever-growing U.S. network. We will now offer nonstop service from 15 U.S. cities to 13 European cities, no other airline can rival that. Within just a year, we have added seven U.S. gateways, creating much greater access for even more Americans to save a tremendous amount of money, and still get to experience one of the world’s best airlines,” said Bjørn Kjos, Norwegian’s Chief Executive Officer.

The world’s fastest-growing airline has already announced 25 new routes from the United States this year, with an additional six scheduled for 2018. Within the last few months, Norwegian has also announced service from London to Singapore, which does connect with some U.S. flights to London, and from London to Buenos Aires, which will launch in February 2018.

Service from Austin-Bergstrom International Airport to London Gatwick will launch on March 27, 2018, and operate three times per week.

Service from Chicago’s O’Hare International Airport to London will launch on March 25, 2018, and initially operate four times per week.

Service from Newark to Paris will launch on February 28, 2018, and operate six times per week. Norwegian already offers nonstop flights from Newark to Barcelona and Rome.

Norwegian is the world’s sixth largest low-cost airline and carried 26 million passengers in 2015. The airline operates more than 500 routes to over 150 destinations in Europe, North Africa, Middle East, Thailand, Caribbean and the U.S. Norwegian has a fleet of more than 130 aircraft, with an average age of 3.6 years, making it one of the world’s youngest fleets. Norwegian was named the Most Fuel-Efficient Airline on Transatlantic Routes by the International Council on Clean Transportation (ICCT). Norwegian was named the World’s Best Low-Cost Long-Haul Airline by the renowned SkyTrax World Airline Awards in 2015 and 2016, and for the fourth consecutive year, named Europe’s Best Low-Cost Airline. Norwegian employs 5,500 people. The airline offers 40 nonstop routes from the U.S. to London, Paris, Scandinavia and the Caribbean.
Follow @Fly_Norwegian on Twitter, join the discussion on Facebook and keep up with our adventures on Instagram. For more information on Norwegian and its network, visit norwegian.com. 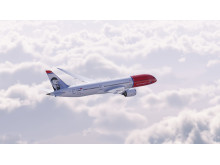