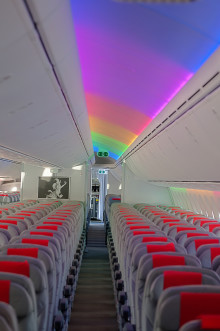 Norwegian (NAS) today reported its fourth quarter and full year results for 2013. The company reports a pre-tax profit (EBT) of 437 MNOK. The company’s total fourth quarter result was -283 MNOK. The year has been characterized by strong passenger growth and international expansion, and additional costs related to the start-up of the long-haul operation.

Today Norwegian took delivery of Boeing’s 1,000th 737-800 aircraft with the sleek Sky Interior. The interior is more spacious and comfortable and has more room for carry-on luggage.

More than 5,500 Americans want to work for Norwegian Air

Norwegian has been awarded “Best European low-cost airline” by AirlineRatings.com. The jury praises Norwegian’s ability to offer its passengers an innovative quality product at a low fare.